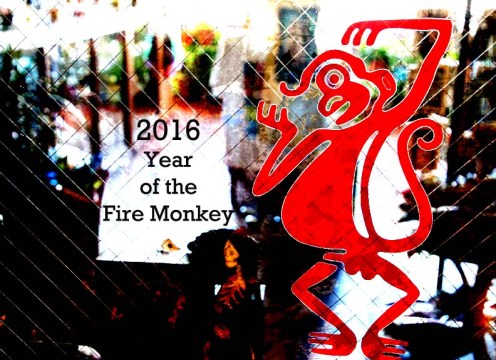 Although I am neither an astrologer nor a prognosticator of any proven reliability, I would like to offer a few observations regarding this Lunar New Year.

The year we are leaving behind is the Year of the Wood Sheep. Sheep, as we know, are gentle animals who move about in herds, becoming easily distressed when left on their own, lost with no sense of direction, crying plaintively. In some eastern cultures, the sheep year is instead a goat year. We also know a thing or two about goats, especially scapegoats. “Wood” or “wooden” are terms often used to convey a sense of thickness, unresponsiveness, lack of intelligence.

The year we are moving into is the Year of the Fire Monkey. Unlike sheep, monkeys are lively, jovial, emotional, unpredictable. In stories, they are often tricksters. As for the fire, well, fire burns wood. Fire is one of the most useful tools ever domesticated by humankind, but also one of the most dangerous.

Based on these thoroughly idiosyncratic observations here is my prediction for the year ahead: things are about to get interesting!