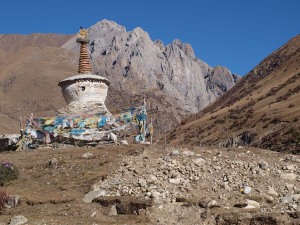 Last night I was privileged to attend a screening of Russell O. Bush’s award-winning documentary, “Vultures of Tibet,” a beautiful little movie about sacred rituals and secular appetites. The film is about the Tibetan tradition of “sky burial,” in which the bodies left behind by deceased persons are taken to high holy places and offered to the vultures. Where we say “dust to dust”, I guess they might say “flesh to flesh.” The film was also about the intrusion of tourists – mostly Chinese, but westerners as well – into this sacred tradition and thus about people feeding their ignorance and macabre emotions with misunderstood images and actions. Bush was treading on dangerous and ambiguous ground, calling attention to these rituals in order to argue that the people who practice them ought to be left alone. He succeeded remarkably well, intimately filming hands instead of faces and even having expatriate Tibetans re-record the voices in order to fully protect the identities of the people who worked with him in Tibet. As an anthropologist, I congratulate him on his cultural sensitivity. As a Buddhist, I thank him for his sincere efforts to understand a tradition that westerners too often discount as merely bizarre. If this film comes your way, don’t miss it!