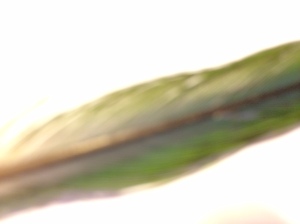 Last week when we had the big rain I discovered a place where a footpath crossed Waller Creek about a half mile from my house. On that particular day, of course, the crossing was flooded, impassable.
Today on my morning walk I went back. The entire creek bed in that area had gone bone dry, so crossing on the footpath was no problem. I ended up on the University of Texas intramural fields. These fields happen to be home to Austin’s largest colony of Monk Parakeets (aka Quaker Parrots) and I was having a lovely time watching the birds flying back and forth between their massive communal nests in the stadium lights.
It wasn’t long before I realized that I was inside the outer perimeter of the fields, which seemed to be fully enclosed, except for exactly the place where I had entered. Determined not to go back, I kept pressing forward. It was like a giant maze! I seriously contemplated climbing the chain link fence. I could see the outside so clearly, but I kept running into locked gates or, worse, fences with no gates at all. Then I found a gate open that probably shouldn’t have been. This led to an actual walkway. And up ahead, I saw a student with a tennis racket entering what appeared to be a gatehouse. If that student came in, surely I would be able to get out. The fence on the front side of the gatehouse had a locked gate. So did the fence around back. The only way out was through the gatehouse. I walked in. “Hey,” I said to the student behind the desk as I nodded and smiled. Then I was out through the front door and free.
Did I mention that after years of searching I had finally found a parakeet feather?